I’ve had my leopard gecko for about four months now and I can safely say that my ‘technique’ to tame him, is working. I’m of course still working on it but I want to share the progress I’ve made so far.

It was very important for me to not force him to do anything he didn’t want. I wanted him to feel comfortable with me and not be scared. Right when I got Arlow I noticed he was very shy. And every time I would go in his enclosure to clean or fill his water bowl, he would hide. Which was to be expected, of course.
As you may have read in this post, Arlow didn’t eat the first month. I was adviced to wait handling him until he was eating. It was really hard not to pick him up but I waited and gave him time. When he FINALLY started eating I was so relieved and excited for the next step.

DISCLAIMER: A lot of the pictures are very dark (and blurry) because Arlow likes to come out when it’s dark in my room.

The one thing I’ve always done is laying my hand in his tank in the evening for a few minutes. At first, he would turn away and hide but after a while he would just fall a sleep next to my hand. I also always talk when I’m feeding him or when I’m doing something in his tank so he gets used to my voice. 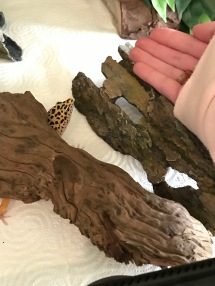 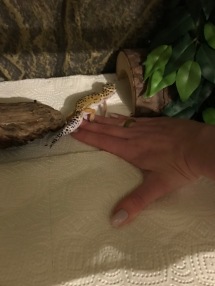 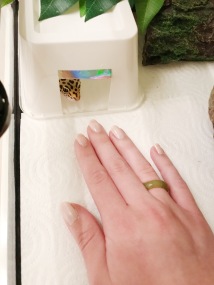 I started to notice that he wouldn’t hide anymore when I entered my room or was refilling his water bowl. This was a big step for him, he wasn’t afraid of my presence anymore.

The next thing, after getting him to not be scared of my hand, was to lift my hand (in his enclosure). This didn’t always run smoothly, but again, after a while he became used to it.

I felt he trusted me enough after a few weeks to take him out of his enclosure. I had a little area on the floor with blankets and some cardboard around it (so he wouldn’t be able run underneath my dresser). It was so much fun to have him outside of his terrarium. 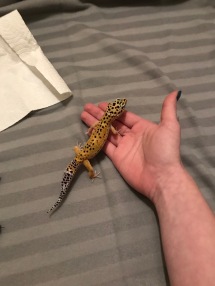 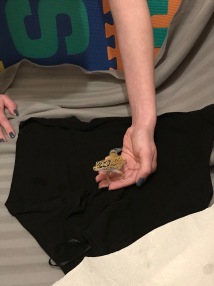 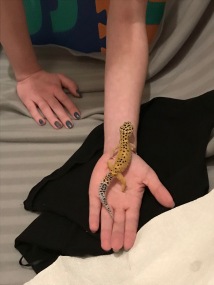 After a few times of doing this AND still laying my hand in his enclosure every day, I let him sit with me on my bed. This went surprisingly well, but I did have someone with me to help me in case he would try to jump off the bed. Arlow can be very fast and this can be tricky when you’re sitting on your bed. After a few times, I got the hang of it. Now I take him out at night when I’m alone without any problems. 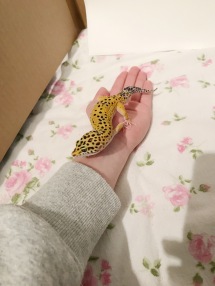 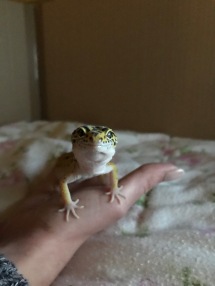 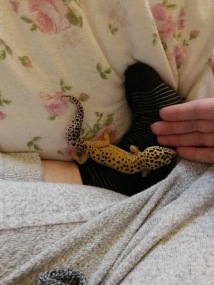 A few weeks ago I noticed that Arlow was ‘asking’ to come out. I couldn’t stop smiling because I was hoping he would do that. He now regularly asks to come out and I couldn’t be more grateful. I really believe that he is now so comfortable with me because I took my time to get to know him and didn’t rush anything. 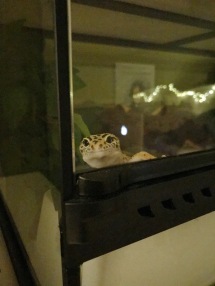 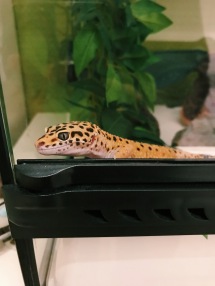 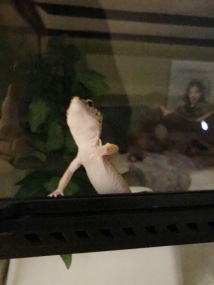 Now when I’m doing something in his enclosure, he comes out of his hiding place to see what I’m doing. He truly is an amazing gecko. 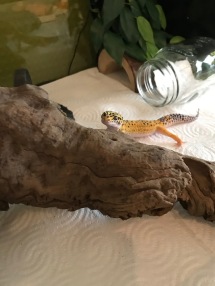 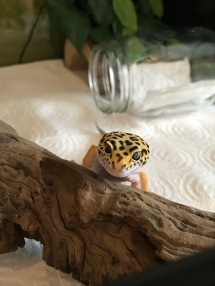 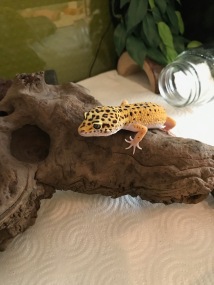 There are still some things we’re working on, like not to jump off my hand mid-air (he maybe has a little too much trust in me and thinks I’ll always catch him ;)). But I also think taming is an ongoing process where consistency is key.

If you have any questions or even advice for me, please don’t hesitate to message me. 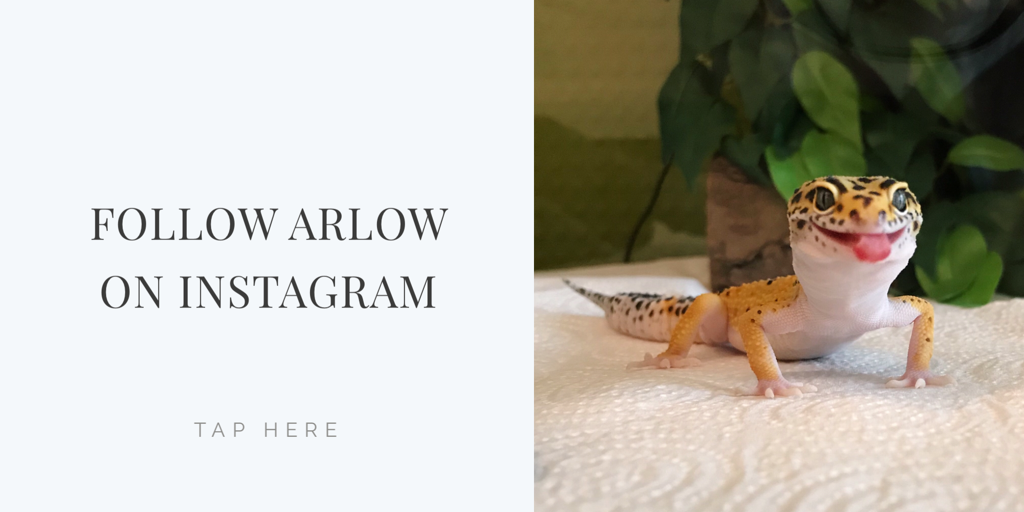 Check out some of my other posts here ↓

View all posts by morethanagecko

Arlow is my 2 year old leopard gecko. At the moment, his favorite thing to do is climbing. He also loves calciworms, sleeping and exploring his enclosure.

He should be on the cover of a lizard fashion magazine
Hanging out with my nugget ❤️ He never misses an opportunity to climb anything and anyone (swipe for videos). Tell me again who first started the phrase ‘leopard geckos don’t climb’
The cutest little geck
Doing a little magic trick for your entertainment ✨floating gecko head✨
Doing some reading
University has been kicking my butt, but this little dude has been helping me go through with his cute little mlems
Loading Comments...
%d bloggers like this: